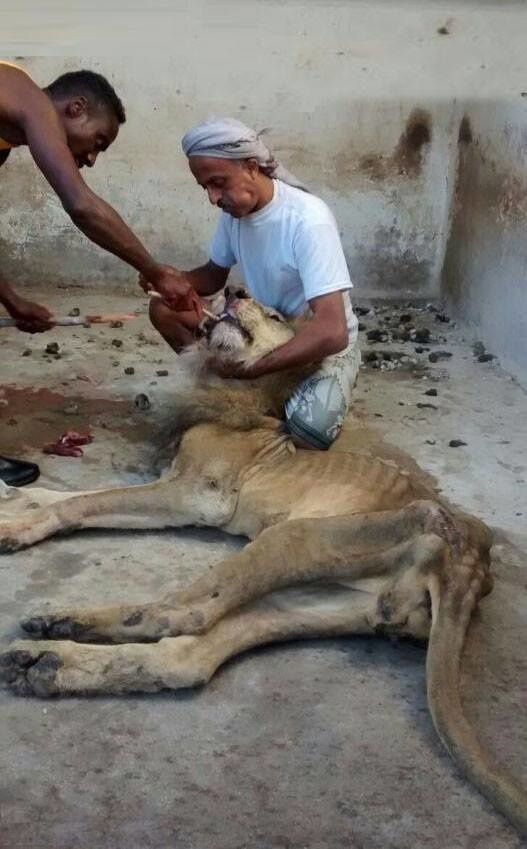 Within the past twenty four hours images have be...en sent in relating to Taiz Zoo that we have known about since 2013. I think its safe to say that no matter what anyone tries in relation to the male lion, this lion we'll consider already dead. There is nothing that can be done for this male lion, even locating a suitable vein for intravenous fluids, foods, Etc would be impossible to locate. We have contacted our Arabic agency in Egypt for a more detailed look into this case. Locating help or even pushing help into Taiz Zoo is going to be somewhat difficult. The zoo is located in the Taiz city of Yemen, see here: http://www.yementourism.com/servic…/touristguide/detail.php… and civil war is raging out of control... Genocide has been reported to be ongoing in the area. The current situation is bleak. [LION IS DEAD]

From what we have been told the area is currently under armed militant control, and has been since 2013. Road blocks have been set up around Taiz by militants that are stopping aid from coming into the city., and surrounding villages. We're unsure as to how many animals remain in this alleged zoo, or if anymore animals are suffering in these horrific conditions.

The zoo and all surrounding areas is under the control of heavily armed Houthis rebels. What I.A.R.F.A are now trying to undertake is locating a head militant of the Houthis and basically pleading for a food pallet to be allowed in with medicines. Should Houthis rebel leaders allow this, then we'll fund that immediately, sending the necessary funding to Egypt, and then shipping the food and medical supplies out. That's easier said than done though.

I.A.R.F.A has communicated to many Yemen followers on our main site, and off site, calling for help in locating someone or people in higher command holding the city. As ridiculous as at may sound, its the only way in which this issue can/may be resolved. Simply turning up or sending anyone to the city, isn't going to help. The Houthis could take environmentalists prisoner, or even kill them, there is also a possibility that on entering the outskirts, no-one will be allowed to go any further. So what we're working on is trying to build a rapport, communication and basically asking for some leniency here, and working on a fact finding mission to establish just what is going on here, how many animals are suffering, are there anymore animals, and what help can be sent in.

Further to this we must also ensure that any aid sent in isn't stolen by the Houthis which rely on funding to fuel their civil conflict: Read more here http://www.bbc.co.uk/news/world-middle-east-29319423 The war has been raging on since the end of 2013, 2014 into 2015 and is continuing as we speak. Arabic I.A.R.F in Egypt have stated the Houthis have practically killed every single animal within this zoo via starvation, a report also confirmed by locals leaving the city. No food or medicine is reaching the zoo, or anyone for that matter. The situation is critical. A petition isn't going to help either.

International Animal Rescue Foundation World Action South Africa do have experience in this type of rescue and more than enough experience at building bonds and trusts in areas of danger relating to zoos. Unfortunately this type of rescue, or even trying to build a rapport can take time, further to this when too many people interfere or try to disrupt the workings, or operational procedures - its the animals in the end that suffer.

This isn't the first time Taiz Zoo has been brought to our attention, and furthermore we don't know if this lion is even still alive. A video sent to us from the Arabic Saba News Agency in 2013 depicts we believe the same lion hereto: https://www.youtube.com/watch?v=El1KBqFz9j0 As one can see the lion is in extreme distress, further to this we're uncertain on a few things relating to aid, and if this zoo does actually have any further animals within it.

The Al Jazera Network confirmed the Houthis have turned this zoo into a cemetery, so again we are proceeding with "extreme caution", and will be wanting to see up to date proof of animal suffering before any of our own private aid is sent for food and medicine. Many people may think this is a little selfish, unfortunately its not. The images could have been posted by a rebel or rebels pretending to be the zoo owners, of which we could be sending funding, food or medicine to rebels thus inflicting more fear onto innocents. This is how complex the current situation is.

A report that has been confirmed is as follows:
[Locals and SABA journalists confirmed]

1. All communications in and out of the zoo in the way of telephone and cell phone masts have been destroyed by rebels.
2. Al-Qaeda rebels are in operation within Taiz, with (unconfirmed reports of 'Islamic State Insurgents fighting the Houthis'.
3. The zoo and surrounding buildings have been destroyed, only a small remainder of the zoo has been left in tact.
4. An unconfirmed report has stated that gun-men went into the zoo killing animals and burning anything that relates to Christianity down, animals that were shot dead, were then set on fire.
5. The current area (city) holds 3-4 fractions and government combatants fighting one another.

EDIT: The male lion from news reports has been reported as now dead.

As one can see from points 1-5 this is going to be a very difficult situation to resolve, and it may not be resolved. If Houthis rebels that control most of the city don't allow aid or help in, then sadly we cannot do a singe thing. Action could have been taken by us in 2013 and 2014, unfortunately keeping communications ongoing is difficult as many telephone lines, and cell phone masts have been destroyed. Banks in the area have allegedly been looted too. So we're unable to send our "own monies" directly into the area. Food poverty is high, there remains little food stalls to even provide food. Our only hope is via pushing help in from Egypt if we're able too.

I.A.R.F.A knows the exact location of Taiz Zoo, however there is no way whatsoever of telephoning, emailing or even sending anyone near the zoo. All communication sent us have come from native citizens leaving the city. With further comm's sent to us via concerned members of the public. Again we have known about this zoo for some years, so please don't send to us anymore requests for help.

NB: Please note I.A.R.F.A do not require funding, and we also please advise that everyone whom see's funding links set up in Arabic or any Eastern EU language to proceed with "extreme caution". We would also like to remind the public that building trust is the main game here to push help into this zoo. Attacking rebels that we need help from (so to say), isn't going to achieve anything. Racist remarks aimed at Yemen citizens isn't going to help either. Demanding that we simply walk into a war zone, or even send a fact mission into a war zone isn't going to achieve a single thing either. We are also aware that planes which are seen flying over the area are also being shot out off the sky. So as you can read, and view in the links the area is under heavy control.

[NB: Its very unlikely that we or any NGO can help until all fighting has ceased in the area. Sadly that is a fact, planes are not allowed to fly into the area either. The situation is very critical]. Please note the Lion we can now report is now dead.